The unbelievably good weather calls for a feel good tune. Even though ‘Good Life’ by Irish artist Soulé was released back in February it has summer written all over it! I love the positive energy of this song and her vibe in general.

Pronounced Soul-A, she was born in the UK and raised in Balbriggan where she’s now based. She cites her influences as Erykah Badu, Macy Grey, ASA, Chrisette Michele, and Nneka. She says she only got serious about singing a year ago but it looks like she’s already set for huge success with her latest single ‘Troublemaker’ racking up 500,000 plays on Spotify in two months, and a Choice Music Prize nomination for ‘Song of the Year’ in 2016.

Diffusion Lab are behind this video, as they were with the Jafaris video I posted recently.

Here she is chatting to Stuart Clark from Hot Press after her set at Forbidden Fruit. You can catch her live at Sea Sessions this weekend and on the Other Voices stage at Electric Picnic.

Last Sunday the lovely John Barker asked me to be a guest on his show Totally Irish on 98FM. As the name suggests, the show is focussed on Irish music, from up and coming and established artists. Ham Sandwich did a live acoustic set followed by a set from Rocstrong. After that I joined John, together with Martin Byrne from Other Voices, to talk about three tracks from three Irish artists: James Vincent McMorrow, Jafaris, and The Fontaines.

I already knew and loved James Vincent McMorrow, I wasn’t such a huge fan of The Fontaines, and Jafaris was by far my favourite track of the evening. You might recognise Jafaris from his role in the award winning Irish movie Sing Street. As well as being an actor, he’s an accomplished rapper and has just released a four track EP called Velvet Cake available on iTunes. My favourite track from the EP is ‘Keep Your Head High’.

Jafaris is working with Diffusion Lab (who are doing some amazing work with Irish hip hop artists) and they have created a couple of videos for this EP, including this gorgeously shot one for ‘Love Dies’.

If you want to check out the whole podcast of the show, here’s the link.  I’m on in the last half an hour. Hope you enjoy!

De La Soul released their first album in eleven years last Friday, De La Soul and the Anonymous Nobody. The first single from the album dropped in June, a collaboration with Snoop Dogg called ‘Pain’.

There are a lot of guest stars including Jill Scott, Estelle, Little Dragon and Damon Albarn. The album sounds fairly eclectic ranging from straight up R&B (Usher) to gangsta rap (2Chainz) and chilled out 90s throwback vibes (Snoop Dogg). I personally love the new wave collaboration with David Byrne, ‘Snoopies’.

The band also released a half hour long documentary about the album detailing the Kickstarter funding for the project. They had set a goal for themselves of $110,000 but the fans were so excited that just 11,000 people raised $600,000 in a few hours. Not many bands can retain a fan base so rabid that they would fund an album after eleven years of silence but De La Soul have a very special place in hip hop.

Three reasons why I love this track:

1. The artist’s name is Earl Sweatshirt. Seriously. Say no more.

2. The lovely piano riff, the shuffly drums and the almost poetic lyrics. Forget the bling, the bitches and the bravado, this guy actually has something real to say.

3. The beautiful, black and white, atmospheric video which starts with a very intense looking toad. Winner.

I had been looking forward to seeing Something from Nothing: The Art of Rap, a documentary directed by Ice T, and I went to the live premiere which was screened in three cinemas across Dublin on 19th July. Ice T interviews many of his peers and friends including Eminem, Dr Dre, Kanye West, Snoop Dogg, Chuck D, Mos Def, Nas, Melle Mel and Ice Cube, and the theme of the documentary is the creative side of rap, how rappers structure their lyrics and the inspiration they have found in artists from the past.

After a while the viewer gets the sense that the film is merely skating along the surface, giving a superficial overview rather than a detailed breakdown. There is little given in the way of social context which was so important to the evolution of hip hop and rap. None of the interviewees talk about the gang feuds, poverty, drug dealing and pimping which was in many cases part of their lives before music provided an alternative. I had expected the film to be the rap equivalent of Scratch, Doug Pray’s phenomenal documentary released in 2001 which explored turntablism, but while Scratch is comprehensive and instructive, Something from Nothing is light in comparison.

Rap is certainly a male dominated art form but even still women were woefully underrepresented in this film. The only women interviewed in the film are Cheryl “Salt” James from Salt n Pepa and MC Lyte. Where were the interviews with Eve, Lil Kim, Queen Latifah, Roxanne Shante and Da Brat to name a few? The most glaring omission was Missy Elliott who is arguably one of the most influential women in hip hop and given the fact that she is a producer as well as an artist I think her viewpoint would have provided much needed gender balance.

My favourite thing about the film were the freestyle raps that each of the interviewees did to camera. Kanye West’s in particular was surprisingly brilliant and filled with attitude. I also loved Eminem’s interview segment as he comes across as much more thoughtful and considered than one might expect given his abrasive and sometimes juvenile public image.

All in all Something from Nothing is entertaining and will have much to interest hip hop fans, but for those looking for an insightful and contextual documentary about rap this may disappoint.

Cherry Wine is taken from Nas’ new album Life is Good, his tenth studio recording released on 13th July. The track features the late Amy Winehouse and is a gorgeous chilled out summer tune. Enjoy.

Grown Up is a great tune with a distinctly Cypress Hill feel and the video, starring nine-year-old actor Dante Hoagland, is genius!

Provider is a brand new Indie and Hip Hop club night which kicked off on the 14th of April in the BASSment of The Lost Society (formerly Spy/Wax). The night is brought to you by a troop of young Dubliners (including the wonderful Hannah O’Connell, whose birthday it is today – YAYY – and who I have the pleasure of working with occasionally) looking to add a straight-up no frills party to the streets of Dublin on a Thursday night. You can expect to bop away to classic and brand spanking new indie tracks and get down and dirty to the hip-hop greats. Admission is  €5 concession and €7 without. They have some potentially very dangerous yet very deadly drink promos to lubricate your night too! Looks like loads of fun. 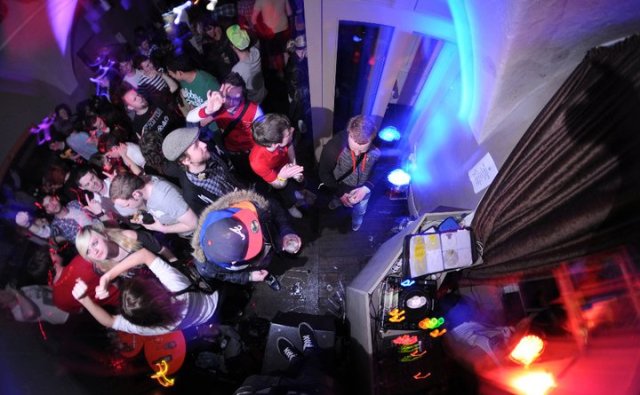